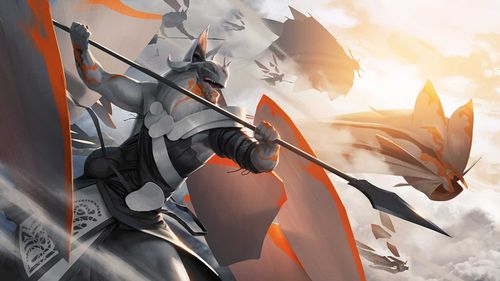 To survive the horrors of the Dust Wars, the Allayi scattered themselves to the cold places of Auriga. Now that the Guardians have awakened they are coming together, hoping to save Auriga and rebuild the life they once had. To sustain and extend their cities, the Allayi must use the Auriga Pearls

, a resource that only spawns on the map in winter. Thankfully, they can also perfectly predict winters. They automatically adapt their abilities and appearance when winter arrives.

When the Endless first came to Auriga they did not find an empty planet, but one teeming with life - some of it intelligent.

The Guardians, caretakers of the planet, were one sentient species; another were their helpers and comrades, the Allayi.

The Allayi were broken and scattered by the Endless, and for centuries they have survived on the fringes of existence. Handing their traditions and stories down in the form of a religious text, the Epistles, and a book of prayer, the Euchologion, they have been waiting in the snows and the shadows until Auriga once again needs them. And it seems that this time has come...

The Allayi are a people so closely aligned to Auriga that their very nature changes as the Dark Seasons occur. While they are friendly and defensive in summer, when the harsh winters arrive they become aggressive and dangerous, reflecting the madness of the planet. They are tied so closely to Auriga's fate that even their bodies alter to match the evolution of these extreme seasons.

Growing strong once again the Allayi have returned, prepared to defend and preserve Mother Auriga with all their grim strength.

A primary feature of the Allayi is that all of their units posses the Shifting Nature capacity, which enables them to take on a Light and Dark form. In Light form, units gain a boost to Defense and Health Regen, while in Dark form they gain a boost to Attack and Movement. Each unit - including heroes - also has a unique capacity that has a similar effect; focus on defense in Light form, and offense in Dark form.

Whether an Allayi unit is in Light or Dark form is largely decided by the seasons; normally they are in Light form in summer, and Dark in winter. However, it is possible to temporarily override this by spending a small amount of Pearls after unlocking the Shapeshifters blessing.

Since Blessings are very similar to technology but acquired through different means, and the Allayi are the only faction with unique blessings, they have been listed here as well.

All Allayi heroes are able to wield Longbows, Crossbows, and Shields as weapons.

After centuries in hiding, it is time to rebuild the Allayi civilization. You must preserve your world and your goddess, Mother Auriga, and unlock the mystery of Her enigmatic Pearls that burst forth in the Dark Season. The destinies of your nation and your planet are intertwined; let us hope that you can save them both...