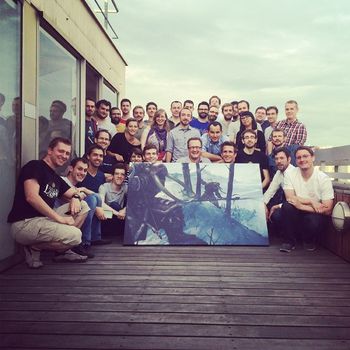 The development team behind Endless Legend

Amplitude Studios is an independent gathering of self-proclaimed video game lovers and developers with a solitary goal - create the best strategy games. Based in Paris, their studio hosts an international team that has worked across the world and on a variety of games including Battlefield, Rayman, Tom Clancy's Ghost Recon, R.U.S.E., Call of Juarez, and Might & Magic. After working closely for years with players for the purpose of sharing, discussing, and comparing ideas, Amplitude wanted to take the idea of community one step further, creating GAMES2GETHER, a platform for all players to participate in the creation of games they play. Their first game, Endless Space, released on July 4, 2012 and ultimately received generally positive reviews.

"GAMES2GETHER is a brand new way for gamers around the world to participate in the creation of the first game from a new studio. If you have always dreamt of becoming a real member of a dev team without enduring code debugging, crunch time frenzy, and offices smelling of cold pizza, then you have come to the right place."

GAMES2GETHER is the cornerstone project of Amplitude Studios, which created and used the system to produce its first game, Endless Space. The system involves its userbase as a primary group for creating game ideas while the studio produces those ideas in its games. Amplitude is currently using GAMES2GETHER to produce two new titles, Dungeon of the Endless, a Rogue-like Dungeon defense game and Endless Legend, a 4X Strategy game. All three games are considered part of the Endless universe.