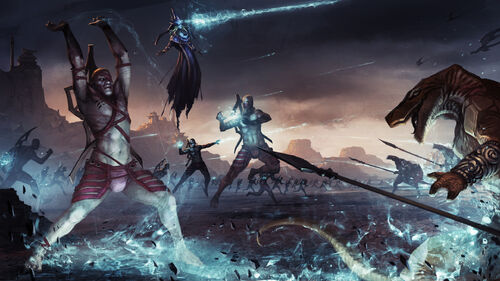 The primary power of these sorcerers comes from their anger. Having survived a long history of slaughter and starvation, the powers that the Ardent Mages discovered - and that permitted them to survive - were those based on Dust magic, agony, and rage. As masters of magic, the Ardent Mages can place pillars on the map to increase outputs or reduce movement costs. In combat, they can use their unique spells, but also raise their combativity when suffering damage.

The Ardent Mages are a people who were born in struggle and pain, and these conditions dominate their day to day lives.

Though they control great powers, they pay a great price to do so. To manipulate the powers of Dust, an Ardent Mage must dissociate their mind from their body. For this they have developed elaborate pain rituals, for the more they are able to withstand the agony and ignore their physical discomfort, the deeper their relationship with Dust becomes. Pain has become a fundamental element of their society, to the point where children are taught from a young age to withstand it.

Stoicism is therefore as important as intelligence, and indifference to physical discomfort is the way in which an individual's worth is measured - be they an Ardent Mage or a stranger.

After falling out with the rest of the Inner Circle in dark circumstances, Zor Abaz has annexed her clan from the greater Ardent Mage nation and struck out for new territory. The suffering must be great, even magnificent, if she is to prepare the Ardent Mages for the endtimes.

Unlike most other faction affinities which have some great effect on the gameplay style of the faction in question, Power Through Pain only really shows itself when creating a custom faction. When creating a custom faction, you are given a pool of 80 trait points to draw from, and every trait you add costs some amount (though some traits are detrimental and thus have a negative cost). Typically, all Arcana and Arcana-related technologies cost 10 points, but having the Power Through Pain affinity reduces the cost of Arcana technologies to 6, and the supporting technologies Dust Mechanics, Dust Purifier, Painosphere, and Sacrificial Amplifiers only cost 4. This means that a faction with the Power Through Pain affinity can get all the Arcana and related technologies for a total of only 56 points, while a faction without it would need 90 points to get them all, and therefore must go without at least one.

That said, Power Through Pain doesn't provide much of a benefit to the base Ardent Mages, since the 80 point limit on traits doesn't apply to the base factions. For example, the Vaulters have a trait cost total of 105.

During a Dust Eclipse, the Ardent Fire capacity inherent to all Ardent Mages units and heroes becomes enhanced. While normally units with this capacity receive a percentage bonus to their Attack

based on the percent of their Life

missing, during a Dust Eclipse, these units also receive a matching bonus to Damage

All Ardent Mage heroes are able to wield Longscepters, Magewands, and Quarterstaves as weapons.

Faresh Zima appears leading an army in Chapter 4 of the Mykara faction quest, and cannot be obtained by normal means in-game. Faresh and the army she is leading must be defeated to complete the quest. Faresh appears at Level 2 with a full set of Tier 1 Iron Armor and wielding a Tier 1 Iron Quarterstaff. Because Faresh only appears as an enemy and therefore cannot have her equipment changed, her listed attributes and capacities include the bonuses gained from her equipment and level.

While many of your people have grown slovenly and soft, the rigors of survival and study have kept you and your clan strong. But now your brother has been killed, and the signs lead in many confusing directions. It will require all the strength you have, and all the pain you can sustain, to solve the mystery and secure the future of the Ardent Mages.