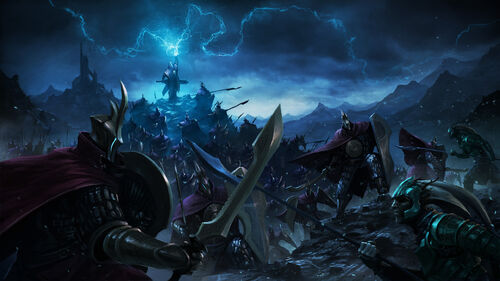 A faction of knights dependent on Dust for survival, they exist only as spirits wrapped in great suits of armor. They are noble warriors who wear the polished armor of chivalry and adhering to its ideals, even though they are immaterial and have lost much of their humanity. The Broken Lords have no use of Food

. To sustain themselves, they require Dust

- both to create their population and to regenerate their units through Life draining.

The Broken Lords are a faction of knights and town-builders; an aristocratic society that believes in honor, virtue and justice. To succor the weak, to champion what is just, to root out evil wherever it may lurk - those are the ideals by which these noble warriors would live.

And yet, the Broken Lords are a crippled people that exist only as spirits wrapped in their great suits of Dust-enhanced armor. Other nations view them as monsters, for their race was fading when it discovered a deadly secret - that by consuming the life forces of a sentient being they could extend their own life span. This rite of consumption is, obviously, a betrayal of their principles and their history. The greatest hope of the Broken Lords, therefore is develop magic that will break this curse and allow them to live without destroying others.

Though the question remains, and haunts their thoughts: Even if they did find a cure, would they want to give up this powerful gift? Their codes and morality insist 'yes', but in their hearts it is much less clear...

There are several significant alterations to gameplay due to the Appetite for Dust trait, mostly centering around the uses for

Dust. To start with, the Broken Lords are completely unable to produce or use Food. While it is technically possible to see the normal Food output of tiles by hovering the mouse over a tile, the Appetite for Dust trait adds a modifier to tiles that reduces the food output to zero; as a result, when founding a city or when the FIDSI output overlay is enabled, Food does not appear. Additionally, the Broken Lords are unable to unlock Technologies or City Improvements that increase Food production, though those that increase Food production as a secondary effect - such as the Central Market - are still available.

to cities when used as a booster - is significantly less useful to the Broken Lords than it is to other factions, so as long as the empire approval is decently high, Spices should be sold on the Marketplace for extra Dust. The Bos Minor Faction also becomes less useful to assimilate, as the empire will not benefit from the +5%

per pacified village that is gained by assimilating them.

Because the Broken Lords cannot generate Food, they do not gain additional

Population in their cities by accruing Food over time as every other faction does. Instead, the Broken Lords purchase new population instantly with Dust, which can be done either from a specific city's info panel, or from the City List screen. The cost to purchase a new unit of Population is based on both the population of the city, as well as the total population of the empire, and is determined by the following equation:

With ELCP the cost is reduced by 10%.

In addition to not being able to produce Food, Broken Lords units and heroes have a base passive HP Regeneration rate of 0% per turn. Instead, Broken Lords units and heroes are healed by spending Dust via the Dust Care capacity. The cost to heal a unit or hero is equal to 0.75 time the amount of health lost, and can be used anywhere, but will use the army's action point, meaning that an army cannot attack and be healed on the same turn; however, because being attacked does not consume an action point, Broken Lords units have a bit of an edge in defensive tactics, since an empire with sufficient Dust can just keep healing their units so long as they aren't killed. It should also be noted that the 0% per turn HP regen rate can be increased by other means, such as the

Pixie Blood booster, assimilating the Sisters of Mercy, or the Penitent Chapel technology.

by 30%, but will make each unit with this ability active take damage equal to 10% of their total health at the end of each of their turns in combat. Once this ability is activated on a turn, it cannot be deactivated.

All Broken Lords heroes are able to wield Swords, Claymores, Longspears, and Shields as weapons.

Martin de Ildan de Suluzzo is received as a reward for completing Chapter 3 of the Broken Lords faction quest. He is Level 3 when received, and his base attributes reflect that, but do not include bonuses from capacities or equipment. It should be noted that De Suluzzo is lost at the end of Chapter 5 of the Broken Lords quest, so it is recommended to not equip him with any expensive equipment.

Your people cleave to the ideals of honor and chivalry, even as they discover cruel and vampiric ways to sustain themselves. They very soul of your nation hangs in the balance as you carve the future of the Lords of the Amber Plains.