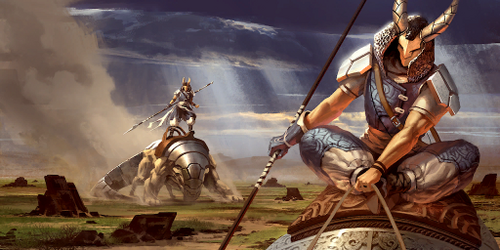 The Dorgeshi are a Minor Faction.

Banished after a series of feuds, these Roving Clan families left the life of their caravans and cities, exchanging the luxuries of merchants for the hardships of warriors. The Clans secrets of beast control were used to master the great Burdemek lizards, turning the Dorgeshi into a fearsome heavy cavalry.

The Dorgeshi villages show the care this people has for their mounts. They live in burrows along with the stables of their lizards, though it should be noted that their interiors are tiled or bricked, dry, and free of foul smells.

per pacified and rebuilt Dorgeshi village on Luxury Resource extractor.