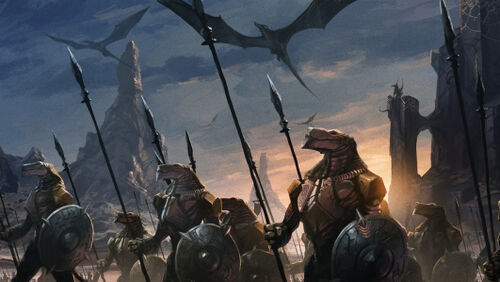 An ancient and venerable race, the scholars of the Drakken prize lore, history, and wisdom above all things. As old and ancient creatures, the Drakken have the immediate knowledge of any living major empire and see one tier further in their Empire Plan. By using Influence

, they can also impose peaceful diplomacy on other empires.

Few in number but exceedingly powerful, they do not seek war but rather relationships, information, and knowledge. Faction histories, artifacts, and ruins are highly prized by the Drakken while wealth, military power, and advanced technology are viewed as insignificant.

Militarily they have limited numbers, and bring to battle very few but very powerful units.

The gradual onset of longer winters has not escaped the notice of this race who are more attuned to Auriga's rhythms than all the rest.

Already they have struck out across the vast planet forging ties with all who share Auriga's lands. They understand well that even if the cataclysm comes again, their first duty is to preserve what the Endless left behind, so that one day, maybe in a hundred years, maybe in a hundred thousand, their great teachers' creations will still endure.

This trait gives the Drakken the ability to force truce, peace, or alliance on a targeted empire in addition to being able to propose truce, peace, or alliance. Forcing these diplomatic states has the benefit of not requiring bargaining, which can be beneficial if the targeted empire is not open to negotiation. Forcing these states requires significantly more Influence

than proposing it; for example, proposing a truce with an empire you are at war with only costs 8

. However, forcing a diplomatic state may end up costing less Influence overall than bargaining for it if bargaining requires a large number resources, cities, or technologies being exchanged.

All Drakken heroes are able to wield Longscepters, Magewands, and Quarterstaves as weapons.

Archivist Mukangung appears leading an army in Chapter 7 of the Forgotten faction quest, and cannot be obtained by normal means in-game. Mukangung and the army he is leading must be defeated to complete the quest. Mukangung appears at Level 6 with a full set of Tier 2 Palladian Armor, a Tier 2 Palladian Quarterstaff, and a Tier 3 Iron Ring. Because Mukangung only appears as an enemy and therefore cannot have his equipment changed, his listed attributes and capacities will include the bonuses gained from his equipment and level.

Cherishing your role as the protectors of Auriga, the many troubling changes in your world force the Drakken out of their isolation as they seek to learn. As you explore and discover new peoples and new problems, you are challenged as well to discover the roots of your own race and its ancient, honorable duty.