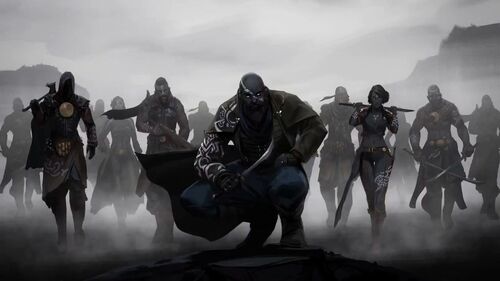 A nightmare out of history, the Forgotten are a faction that all others thought to be lost or dead.

Against their will they were forged into a tight society of violent and distrustful survivors, having spent the final years of the cataclysm alone on the surface of Auriga.

Now, as rifts in their society have led a splinter faction to declare its independence, the Forgotten are risking everything in the hopes that the other factions will accept them - or kneel before them.

The Forgotten are completely unable to produce or use Science

. While it is technically possible to see the normal Science output of tiles by hovering the mouse over a tile, the Science Phobic trait adds a modifier to tiles that reduces the Science output to zero; as a result, when founding a city or when the FIDSI output overlay is enabled, Science does not appear. Additionally, the Forgotten are unable to unlock Technologies or City Improvements that increase Science production, but those that increase Science production as a secondary effect - such as the Arts Council - are still available.

to cities when used as a booster - is significantly less useful to the Forgotten than it is to other factions, so as long as the empire approval is decently high, Moonleaf should be sold on the Marketplace for extra Dust. The Haunts Minor Faction also becomes less useful to assimilate, as the empire will not benefit from the +5%

per pacified village that is gained by assimilating them.

With A for each Era being:

All Forgotten heroes are able to wield Swords, Claymores, Axes, and Claws as weapons.

Due to the Hero-focused path of the Forgotten's faction quest, a number of quest-specific heroes appear over the course of the questline. The most notable one is Ziema Adya, who is received as a reward for completing the second chapter of the faction quest, and whose recovery is a central focus of the quest's story. The player also receives the heroes Sable Deceiver Napog Dauda, Skya Keeper Dabuo Ofosu, and Efalo Tegret leveled up to Level 8 as a reward for completing the eighth chapter of the faction quest.

There are also a few heroes that appear leading enemy armies during the questline who cannot be obtained through normal means in-game. These include the Vaulter hero Agi Kinztak, the Drakken hero Archivist Mukangung, and the Forgotten hero Arla Sabor, who will be shown below.

Ziema Adya is initially received as a reward for completing chapter 2 of the Forgotten faction quest, but a second version of her is received upon completing chapter 3. When received, this second version of Ziema, is at level 5 (regardless of whatever level the previous version was at), has 4 unspent skill points, and is equipped with Tier 1 Iron armor and the Swords Shadowbrand and Shadowbinder (regardless of what equipment the previous version had). Additionally, Shadowbrand and Shadowbinder are also unlocked to be equipped on other heroes upon completing Chapter 3.

Arla Sabor appears leading an enemy army, the destruction of which will complete the final objective of Chapter 8 of the Forgotten faction quest, and cannot be obtained by normal means. Arla appears at Level 7 with a full set of Tier 1 Hyperium Armor, a Tier 1 Hyperium Claymore, a Tier 1 Hyperium Ring, and a Tier 2 Iron Ring. Because Arla only appears as an enemy and therefore cannot have her equipment changed, her listed attributes and capacities do include the bonuses gained from her equipment and level.

Frustrated by the insularity - and perhaps cowardice - of your people, you and two allies decided to leave and forge your own destiny. But your journey barely started before disaster struck, and your mission has turned to one of bloody revenge.