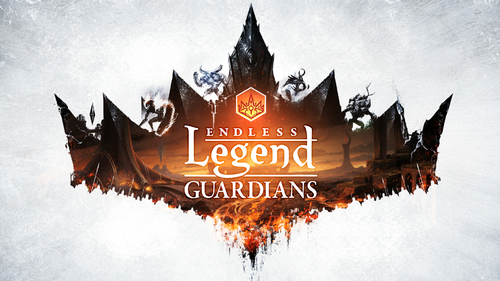 There are older and greater things in the universe than the Endless, whose few hundred centuries barely scrape the surface of history. What of those older entities, those other forces? Did they disappear before the arrival of the Endless, or could the Endless, at the height of their power, have contained and controlled them? And now that the Endless have faded or moved on, might some of these elder beings suddenly rise up again…?

Guardians is the first expansion for Endless Legend. Released on April 29th, 2015, this expansion adds Global Events, Legendary Deeds, and the Guardians. The expansion can be purchased on Steam here.

Guardians introduces a number of global cooperative and competitive quests, as well as a number of randomly-occurring world effects.

Global Quests are a special type of side quest that are available to all players in the game simultaneously. There are two main types of global quests, Competitive and Cooperative. Competitive quests involve some goal that can only be completed by one player, and provides a significant reward upon completion. Cooperative quests start by introducing a negative World Effect, then presenting a means to remove said effect that all players may contribute to; upon completion, the World Effect is removed, everyone that contributed receives a reward, and the player that contributed the most receives an additional reward.

World Effects are, as the name implies, effects that apply to the whole world and all players in it simultaneously that may be beneficial or detrimental. These effects come into place semi-randomly, and typically last for a set duration (10 Turns

on Normal speed), with the exception of "Lack of Luxury", "Minor Faction, Major Pain", and "Unwanted Oxidation", which trigger the cooperative quests "The Price of Luxury", "A Plague of Savagery", and "From Dust to Rust" respectively, and the effects will only be removed once the respective quest has been completed.

Every Research Era except Era VI has three Legendary Deeds that are available to be completed by all the Empires in the game. The Legendary Deeds available in the later Eras are unlocked for all Empires to complete once any Empire reaches that Era, regardless of their own technological progress; so an Empire that is still in Era II may complete a Deed in Era IV, so long as another Empire somewhere in the world has reached Era IV.

Among the rewards that can be received for completing a Legendary Deed, the Legendary Buildings are the most notable, and so they will be listed here.

Guardians are colossal solitary units that can be recruited through research and subsequent construction. Some of the guardians can also be unlocked via Global Quests.

The five different guardians all have unique Army Actions that they are able to perform, as well has having unique powerful capacities. Constructing a Guardian is similar to constructing a district in that you "build" the guardian on an available tile adjacent to your city; as such, anyone who can see your city can see that you are constructing a guardian, construction on it can be halted by a siege, and as long as you are building the guardian, districts cannot be placed on that tile.

In addition to the other features that were previously mentioned, Guardians also adds Unique Buildings - a type of city improvement that provides a large bonus to a specific resource, but can only be built once in your empire.