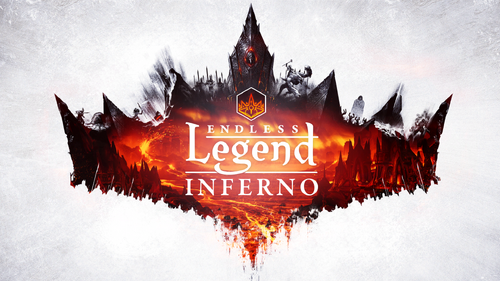 Rescued from the brink of extinction after the invasion of their home world, the Kapaku were evacuated by the Concrete Endless and sent to Auriga. They were promised a new beginning on a new planet, but discovering the true intentions of their saviors will pit them against both Auriga’s current denizens and the dark remnants of the Dust Wars.

The Kapaku are tinkers and inventors, a race of craftsmen with powerful bonds to earthen energies. Small in size, their resourcefulness and skill led them to create powerful stone golems to use as labors and soldiers.

The Kapaku are a new race uniquely suited to the Volcanic Terrain, able to thrive off it where other races would struggle, and their symbiotic relationships with their golems allows them to exploit more resources more efficiently, fueling their machinery to turn Auriga into a new Volcanic Paradise.

Inferno is the fifth expansion for Endless Legend. Released on August 2nd, 2018, this expansion adds the Kapaku major faction, Volcanic terrain, and Dust Eclipses. The expansion can be purchased on Steam here.

Survivors of the decimation of their own world, the Kapaku have slumbered for centuries as they crossed the stars. Emerging onto Auriga's horrifyingly vibrant and green lands, they have a single aim - to recreate their old world of ash and lava. The Kapaku can only get their Food from volcanic terrain. Yet, they can also rely on their Volcanoformer machines to change any terrain into a volcanic one.

A new type of terrain, Volcanic terrain provides a decent amount of Industry

, but - with the exception of the Kapaku - produces absolutely no Food

on tiles. This does not, however, prevent cities from producing food through other means, such as City Improvements. Additionally, Volcanic regions have a higher concentration of Strategic Resources in them than other regions, making them very valuable to empires that are able to mitigate the penalty of reduced Food production.

A seasonal phenomenon that can only occur during Summer, and occur somewhat randomly, with only the Kapaku knowing when the next eclipse is due or when the current one ends, thanks to their "Stargazers" trait. The length and frequency of Dust Eclipses can be somewhat adjusted during the game's setup, but are always semi-random in both these traits. After a Dust Eclipse ends, there will always be at least one turn of summer before Winter begins.

The turn before a Dust Eclipse starts, the lighting will change to give the world a dusk-like appearance, and when the Dust Eclipse fully begins the world will appear as though it is night, with a phenomenon resembling the aurora borealis appearing above the world. However, aside from the visual changes, a number of beneficial effects will come into effect for the duration of the eclipse that are meant to promote exploration and active plays rather than the more defensive strategy Winter tends to promote. Additionally, during a Dust Eclipse, the temple of the ruins of the world become refreshed, making it temporarily possible to search them again (thought this can only be done once per ruin by any empire), and Confluxes appear on the map, which are collectable temporary boosts to an army's attributes that last until the end of the eclipse.