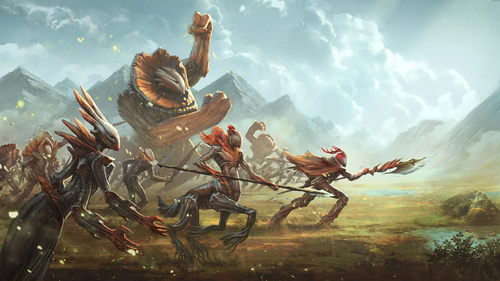 Ancient dwellers of the subterranean realm with mycelial webs stretching throughout the crust, the Mykara are one of Auriga's oldest species. Legend has it they have broken onto the surface many times through the ages, in an eternal struggle with the great Urkan beasts. The Mykara use Food

from their unique city to exploit points of interest in unexploited regions. Although captured cities cannot be further developed, they still grant their tile outputs and allow the symbiosis of other factions. To be most effective, the Mykara seek to control the Urkans.

The Mykara are a race of sentient plant matter and fungi, a single organism spanning thousands of semi-autonomous agents and time immemorial, ever adapting to survive and thrive. They spread all over Auriga as a massive underground root system, sprouting on the edges of the map, clinging to the regions other factions leave unattended.

The Mykara are a single, vast organism that has spread beneath the surface of Auriga, covering most of the planet. Yet all roots lead to home, their capital serving as a hub for their physical spread and their consciousness. Consequently, the Mykara are focused on a single city and have to exert their control over the world by different means, much like the Cultists of the Eternal End.

Unlike their more religious rivals, who have to pacify villages and convert them with Influence, the Mykara do not have to be present near the areas they want to claim. As long as you have had vision on a point of interest before and it is located in a neutral region, you can begin growing a Fungal Bloom on it.

This trait prevents the Mykara from producing settlers, but allows the Mykara to expand by creating Fungal Blooms on Points of Interest across the map so long as they are in a region that is either neutral or controlled by the Mykara. There are several types of Fungal Blooms, which have different effects depending on where they are built, such as the tunnel entrances that can be built on Ruins which allow fast travel for Mykara units. For some of these Fungal Blooms, the appropriate technology must be unlocked before they can be built, such as Alchemist's Furnace being necessary to construct Mykaran Titanium and Glassteel Extractors.

Industry to be built, however, the Fungal Blooms require a certain amount of

So, the cost of the first Fungal Bloom is 5

, and the cost of the second Fungal Bloom is 7

if you start building it while the first is still progressing, or 6

. Therefore, the total cost to the Main City's Food production given X progressing blooms and Y completed blooms is as follows:

If another Empire takes over a region where the Mykara have Fungal Blooms constructed, then the existing Blooms will remain, and any under construction will be completed, but they will be unable to construct any more in that region. However, it is possible for the armies of other Empires to destroy Fungal Blooms in a similar way to Pillaging - by dealing Fortification Damage

until the bloom is destroyed.

During a Dust Eclipse, the Mykara are able to use

When a faction with this trait conquers a city, rather than the city becoming one that belongs to the faction that conquered it, it becomes Overgrown. While Overgrown, the city's population and improvements remain dormant, it has no trade routes, no militia, no governors, can't be spied on, and has a maximum

; however, units can still be garrisoned on Overgrown cities. An Overgrown city also increases the Influence cost of the Empire Plan as though the owner had gained an additional city, and reduces the Empire's total Approval slightly. Overgrown cities only grant FIDSI output from tiles to the captor's main city, but revert to regular cities when re-captured or captured by another faction without the "Overgrown Cities" trait. Overgrown cities also grant their owner ownership of the region, allowing for placement of Fungal Blooms. An Overgrown city can be razed after owning it for 8 turns.

All Mykara heroes are able to wield Claymores, Swords, and Shields as weapons.

A Vaulter leader, saved by the Mykara after the slaughter of her people, slowly comes to terms with her new existence - and the strange symbiosis between the Mykara and the Urkans.