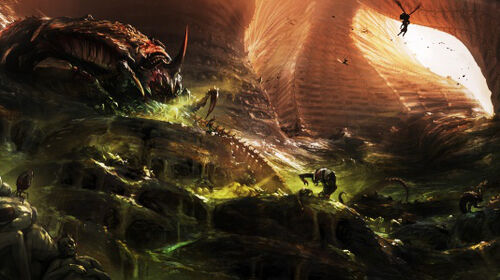 A hive-people that survive by ingesting or converting others as they infect them with their plague, the Necrophages are scavengers and survivors. Always hungry and always hostile, they are viewed as a scourge by other people. The Necrophages always seek for Food

to proliferate. To sate their hunger, they can consume enemy units they kill, but also rely on populations coming from villages. They can't negotiate any kind of peace, always acting with aggression towards other living beings.

The Necrophages are a scuttling monstrosity polluting the surface of Auriga; an insectoid menace that should be crushed under one's heel like the mutated cockroaches that they are. Or so the Vaulters, the Wild Walkers, the Broken Lords and every other nation on the planet would have one believe.

Naturally, the Necrophages themselves don't share this view - in fact, they hold very few views other than fight, feed and propagate. The Necrophages have found a niche in the environment that suits them very well: They will win by numbers; by elevating the colony over the individual; by constant war-fare. Something between a hive insect and an undead horde, they reproduce by laying eggs in the bodies of fallen enemies.

Occasionally the offspring even inherits elements of the host's DNA accelerating their process of change and adaptation. Emotionless, relentless, and driven by their biology, the Necrophages do not waste time with diplomacy and commerce.

All Necrophage heroes are able to wield Battle Axes, Claws, Swords, and Shields as weapons.

Ka-Riss is received as a reward for completing Chapter 2 of the Necrophages faction quest.

Many species run rampant on Auriga, but only the Necrophages are truly of the planet. The others are thieves and trespassers; the others must die...