Growing up deep beneath Auriga, Q9 never imagined a life on the surface or to function independently of the mass of Mykara. However, as a normal part of fungal life its bloom was evolving slowly across crevices in the caverns when it happened upon an ancient Endless laboratory. While the technology was of little interest at the time, the concentration of Dust was enough to trigger a powerful response within the bloom. It quickly died off except for Q9, who evolved over weeks while slowly ingesting the biomass - and some of the knowledge - remaining within the facility. When it finally left it decided that the mysteries of subterranean spaces were no longer enough, and it set out to discover sunlight and pursue a life of exploration on the surface. 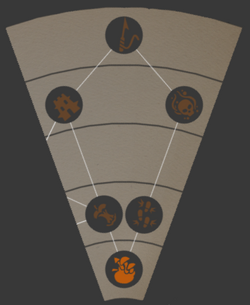