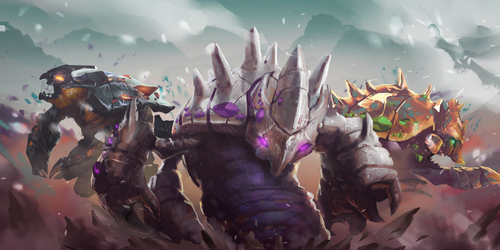 The Urkans are three giant, powerful, indestructible units introduced in Symbiosis that appear on the world map over the course of the game. When an Urkan appears, it will be rooted into that region, effectively claiming it so that no-one may found a city in that region so long as the Urkan is there. All Empires are able to see where the Urkan is, and as such will be able to go to it and try to tame it. If a number of turns pass and the Urkan is still not tamed, it will move to another random neutral region, and again remain there until it is either tamed or it moves again. Urkans have an upkeep that is ten times greater than that of a standard unit.

Urkans are also able to garrison up to 4 Urkan Lice units on themselves, and while Urkans are neutral, they will produce roaming armies of Urkan Lice that patrol the region the Urkan is in, and will remain in the region after the Urkan leaves, making it potentially quite hazardous to armies that aren't well-equipped. The Urkans themselves are as follows:

Urkans can be tamed by two means: defeating them in battle, or offering them a tribute of Luxury Resources. Which method you use is largely based on what you have available to you; if the Urkan is demanding a large amount of a Luxury Resource you don't have access to, it will probably be better to try and defeat it in combat, but note that doing so will result in the Urkan having only a small portion of their max HP an no Lice garrisoned until they regenerate, and another empire may wrest control of the Urkan in that time.

Once you have tamed an Urkan, you may also release it from your control at any time.

Once you control an Urkan, there are effectively two modes of operation under which you can use it: Rooted and Uprooted.

While the Urkan is rooted in a region, you effectively have control of that region in the same way that the Urkan would have if it were still neutral. As such, the region you root an Urkan in must be neutral as well, and you won't be able to colonize it while the Urkan is rooted there. While rooted, you may move the Urkan to a new region with the Migrate Urkan action, but doing so costs 1 Action Point, and it has a cooldown period of 4 turns.

In addition to granting you control of the region, Urkans will also extract resources from the region for your empire, and may provide additional benefits or penalties for adjacent cities if you have completed the appropriate Urkan training.

While uprooted, Urkans effectively behave like any other army. They can move around the map, attack, pillage, and so on, and will retain any garrisoned units in this form. If the appropriate training has been unlocked, they may also provide beneficial effects to other friendly armies in the same region while uproot, and gain access to the powerful Tremor Siege army action, which deals massive Fortification Damage

to a region's city from anywhere in the region. You may also resettle an Urkan in a neutral region so long as it has 1 Action Point. 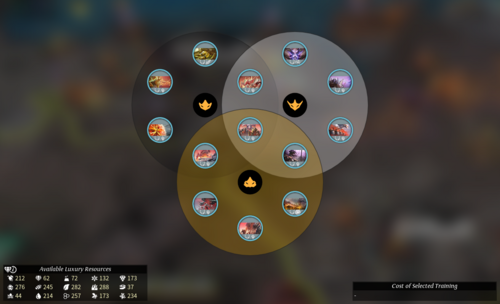 Urkan Training is a way to make the already-powerful Urkans even more powerful by unlocking special traits and bonuses for the Urkans. While each Urkan has some training that they can do by themselves, there are a few that are only available if you have two Urkans, and one that is only available if you have all three. All Urkan training costs some Luxury Resources to do, with the amount and tier of the resource depending on how many Urkans are needed for the training; 15 Tier 1 for 1 Urkan, 25 Tier 2 for 2 Urkans, and 35 Tier 3 for 3 Urkans. The resource that is specifically needed for each training is determined randomly at the start of the game.