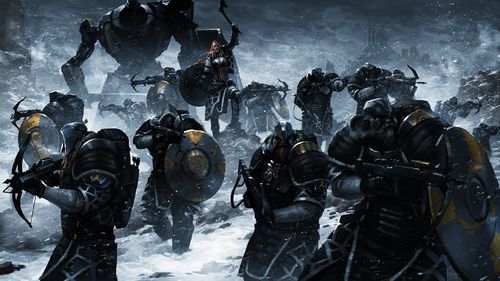 The true origin of the Vaulters is lost even to themselves. Their history, as they teach it to their children, begins within a great, metal habitat lodged beneath the surface of Auriga. Naturally conservative and wary, the Vaulters have limited relationships with the other peoples of Auriga. By selecting one Strategic Resource as a Holy Resource

, the Vaulters can use it far beyond common understanding. They can create unique unit designs and city improvements or even teleporting armies that can instantly move between cities. Defense and research are also part of their main strengths.

This is a time of change for the Vaulters. For countless generations they lived as loosely-federated clans in the vast underground labyrinths that riddle Auriga. Their skills in mining and crafting made them comfortable, and their study of ancient artifacts slowly unlocked the secrets of their world's past. Though their origins were lost in legends and myth, they had found peace and prosperity in the deep places of the planet.

Suddenly, now, the Vaulters have been forced to abandon those ancient halls. The Great Quake broke walls and ruined roads and bridges; as their towns crumbled around them they fled to the surface. Some turn for answers to the priests in the Church of the Great Orrery, others look to their leader, Zolya Ilona, First of the Bloodline. For a people deeply bound by tradition and unused to change, the surface of Auriga is a frightening place.

Torn between the secrets of the planet, their own traditions, and their need to survive, the Vaulters may struggle. But they will not fade, or surrender.

This trait provides the ability to select one strategic resource to be used as a booster. This functions similarly to a luxury resource booster, in that by spending a sum of the resource, the empire will get a temporary boost; the cost and duration of this effect is the same as for luxury resource boosters. The effects are as follows:

During the time that the booster is in effect, the selected resource is considered the Holy Resource, and having any of the resources selected as the Holy Resource provides a number of bonuses beyond the booster effects. First, it unlocks the ability for your units to teleport between cities; so long as an army has some movement points remaining, it can teleport from any city tile in one city to any other city in the empire, so long as there is a city tile in the destination city open for them to arrive at. This ability is incredibly useful for quickly moving units around your empire, and because it is not prevented by siege, can be used to get reinforcements to a besieged city very quickly. Additionally, because all Vaulter units have the Technolover capacity, any weapons or armor they're equipped with that is made from the Holy Resource will provide a 35% greater bonus to attributes, i.e. a weapon that grants +20 attack normally will grant +27 attack if it's made from the Holy Resource.

During a Dust Eclipse, the Vaulters' teleportation ability has some expanded functionality. Instead of only being able to teleport units between cities, it is now possible to teleport units - but not heroes - onto an army being lead by a hero anywhere on the map; however, there must be room in the army for the units that are to be teleported, as those units will automatically merge into the hero's army, and will not teleport if there isn't enough room.

As with normal teleportation, a Holy Resource booster must be chosen, and the units to be teleported must do so from a tile of a city you control.

All Vaulter heroes are able to wield Longbows, Crossbows, and Shields as weapons.

Agi Kinztak appears leading an army in Chapter 6 of the Forgotten faction quest, and cannot be obtained by normal means in-game. Agi and the army she is leading must be defeated to complete the quest. Agi appears at Level 6 with a full set of Tier 2 Glassteel Armor, a Tier 2 Glassteel Crossbow, a Tier 2 Glassteel Shield, and a Tier 3 Iron Talisman. Because Agi only appears as an enemy and therefore cannot have her equipment changed, her listed attributes and capacities will include the bonuses gained from her equipment and level.

Your legends speak of places and things that you do not see on the world of Auriga. It is time to learn more about your planet and your past and, in this way, preserve your future.