Ziema Adya (2nd Form) is a Forgotten hero received as a reward for completing Chapter 3 of the Forgotten faction quest. This form of Ziema replaces the original Ziema Adya, and is received at Level 5, with 4 unspent skill points, and wielding the swords Shadowbrand and Shadowbinder. The Attributes shown reflect her initial level, but do not include bonuses from equipment or capacities.

Ziema Adya reborn, a blazing phoenix raised from the ashes of her destruction, is a sight to behold. Reunited with her dazzling swords Shadowbrand and Shadowbinder, she is a howling dervish of blades and menace as she careens into battle; gouts of blood and spasming limbs trail in her lethal wake. Many say she is even more dangerous than the Master Shadow they knew of yesteryear, but if you look closely you will see a recklessness in her eyes... perhaps, some might say, an emptiness. Some scars will never fade away. Ziema might have mastered the perfect dance of death, but at what price to her soul? 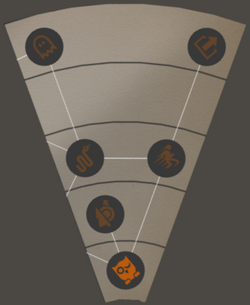